Established in 1964— The path to Otowasushi until today

The president (Hiroshi Hashimoto) graduated from high school. To open a sushi restaurant in Itsukaichi, he started training at “Otowasushi” which was located in Bunkyo Ward, next to the mansion of the former Prime Minister, Ichiro Hatoyama.

After training, he obtained permission from the original “Otowasushi” to open the same brand by himself and return to his home.

[Picture]
At the end of his training, Mr. Keizo Takahashi, a former NHK news caster (the second one from the left), visited him for interviewing. 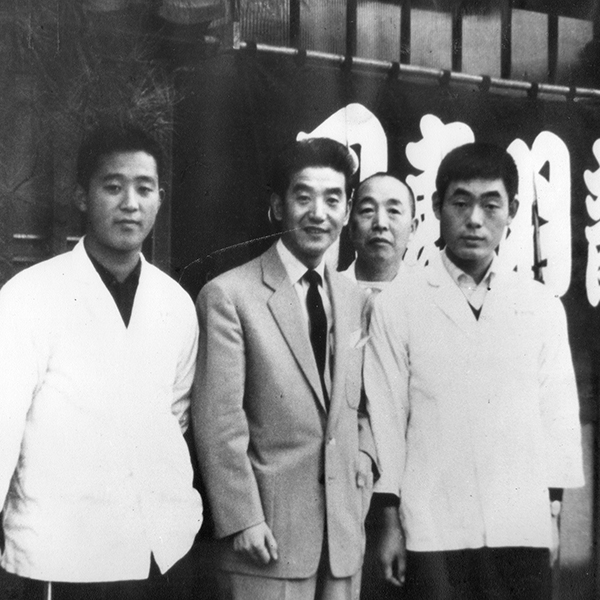 He opened his sushi restaurant “Otowasushi” in his hometown Musashi Itsukaichi on April 1st in the year of Tokyo Olympics.

We had a first renovation in this year.

The current chef specialized in Chinese cuisine came here. Young employees delivered foods to homes by a bike and bicycle at that time.

“Eel dishes” were served only on the midsummer day of the ox, but they became the staple dishes.

We had very busy days because of the bubble economy from this time to 1991. After this period, our serving style has gradually changed for 20 years, and reached to the current business style.

We started to purchase eels directly from Lake Hamana fisheries cooperative association, and here we are.

We created the noodles in each season. Especially miso flavor ramen noodle soup with oysters which was served only in winter gained popularity.

We started catering services which resulted in expanding our business.

We started to sell a local food “danbee soup” which Tourist Association Youth Department created and won the Grand Prix of local’s favorite foods. Since then we have served it, and it has become our specialty.

We started to sell a bowl of rice with sashimi on top.

We started to sell hand-shaped sushi of chef’s choice, and it gained popularity.